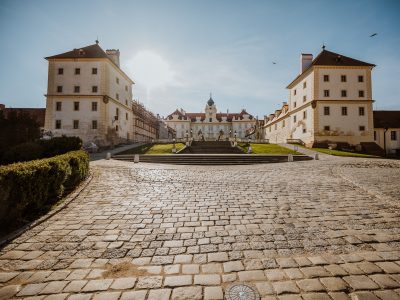 The main princely residence in Valtice experienced its biggest expansion in the 17th and 18th centuries. During this period, Valtice castle was built – its appearance has changed little relative to today’s. Karel I of Liechtenstein (1569-1627) and his son Karel Eusebio (1611-1684) created a three-courtyard palace complex surrounded by a number of agricultural buildings under the supervision of a number of Italian architects. Sources indicate that from at least the early 17th century horses were stabled here. In his publication, Architect und Erfinder, which covered the history of the development of the Valtice Chateau, Gustav Wilhelm stated that Andrea and Jan Křtitel Erna built riding stables and buildings around the first courtyard in 1643 on a flat area in front of the castle moat. Sources do not give a satisfactory and unambiguous answer to the question whether this 85-meter-long building stood on the same site as today’s riding school.

It seems more likely that it was located to the left of today’s Western castle frontage, ie. in the area of today’s upper stables (the current tourist information centre). However, the basic contours of the yard and its buildings certainly date from the first half of the 17th century.

The abovementioned Karel Eusebio is usually considered to be the founder of Liechtenstein horse breeding. However, he probably followed in the footsteps of his father, Karel I who, through his marriage acquired the Usov manor and also the breeding stock of the Lords of Boskovice. From the time of Karla Eusebio, we find references to numerous consultations on the breeding, exchange and purchase of horses with a number of prominent aristocratic families. In the second decade of the 18th century the upper stables and the Spanish stables were built in front of the castle.

According to the conclusions of a historic building survey, the area in front of the Castle, (the Agricultural courtyard) dates from earlier. However, its current layout on a three portals, stables and winter riding school was built after the arrival of Prince Anton Florian (1656-1721), a courtier of Emperor Charles VI. and his architect, Anton Ospel.

At that time, the longitudinally covered riding area probably had a two-saddle design with a central valley. The roof structure was significantly modified in 1871 to a type of mansard roof which was designed to be just so high as to not obscure the views from the castle of Mikulov Castle and Pálava.

After World War II the winter riding school was used as a tobacco drying kiln. A drying machine and concrete floor were installed and a boiler room was built. The gradual restoration of the area began in 1970, a process that is in many ways challenging in terms of heritage conservation.

The main intention of the recently completed reconstruction of the riding hall was to return it to its 18th century form. After conducting archaeological research, the floor was completely rebuilt based on preserved fragments to its original design; wooden planks on a beam grid

The building is completed with all the technical facilities needed for the comfort and safety of visitors. Hall Riding School has an area of almost 1200 m2 which corresponds to a seating capacity of 800.  There is full disabled access to the venue.

After World War II the winter riding school was used as a tobacco drying kiln.  © zamek-valtice.cz