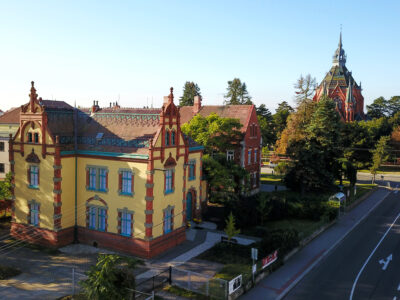 A late historicist building was built in Poštorná in 1908–1909 by Johann II, Prince of Liechtenstein, according to the design of the Liechtenstein court architect Karl Weinbrenner, from whom also comes the most distinctive building of Poštorná – The Church of the Visitation of the Virgin Mary, which is located nearby. The three-storey villa attracts attention both historically and monumentally. A very valuable decoration is carried by the red brick facade from the former local Liechtenstein brickyard and the roof is formed by the original burnt roof tiles. Many original building details can also be found in the interior of the building: the central arcade staircase, window and partly door fillings or period tiles. There is also a cellar and a large garden.

After the establishment of the Czechoslovak Republic, the villa was briefly owned by the Ceramic Works. In 1924, it was bought by wine salesman Rudolf Havlíček, who was son of merchant, mayor of Poštorná, mayor of Sokol, treasurer of volunteer firefighters, member of Občanská beseda and above all a tireless patriot and fighter for the Czech school in Poštorná Alois Havlíček, whose name the villa bears. After 1948, the building became the property of the state like many others and subsequently a health centre was established in it, which operated until 2010. Currently, the villa is managed by Nadační fond Moravská krása (Moravian Glory Foundation), which seeks to remove inappropriate interference from past years and highlight the genius loci of this place. The design of building modifications envisages the preservation of the original layout of the villa in a sensitive connection with the historical spirit of the building. The reconstruction and further adjustments are continuing on the large surrounding land as the aim is to create a pleasant and inspiring space for meetings, exhibitions and workshops of traditional crafts in the spirit of Alois Havlíček’s patriotic mindset: to support the valuable cultural heritage of our country.

Capacity 60 seats. Venue is not barrier-free