The Knight’ Hall of Lednice Chateau 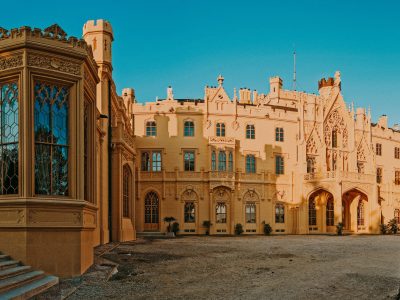 The noble family of Liechtenstein did not overlook the construction of the castle itself.  They altered the exterior in line with dominant contemporary building styles and also expanded the building. After baroque came classicism and then empire This was followed by the present-day English Tudor Gothic beauty of the chateau which was created in the mid-19th century by architect Georg Wingelmüller. Part of the first tour route for castle visitors is the entrance hall. It extends through two floors of the castle and ends with an elaborately carved cassette ceiling on which a monumental brass chandelier with 116 arms is mounted.  It weighs 690 kg.

The family portrait gallery hung on the wooden panelling above the self-supporting staircase. Of the original eleven portraits of the ancestors of Liechtenstein from the 14th to 16th Centuries, only three portraits remain; of Emanuel, Gundaker and Philip Erasmus. At the close of World War II, the other paintings from this collection of princes were rescued, along with other art and objects, and relocated to Vaduz, the capital of the principality. Two banners of the Hussars regiment of 1801 have been placed in the antechamber as a reminder of military glory.  The regiments were commanded by the Prince and by Marshal Jan I. Joseph, the military leader and diplomat from the times of the Napoleonic wars. The colours are on authentic staffs and thongs and bear the inscription; “Pro rege et patria” (ie, “For King and Country”).

The adjoining Knights’ Hall gives the impression of a castle hall, thanks largely to its network vault, which mimics English castle architecture. The decorative details of the vault studs, ribs, and feet at made in crushed limestone rather than sculpted from stone. Knights’ armour is displayed on brackets along the walls. The sense of antiquity is highlighted in the wooden wall cladding, which is decorated with Gothic ornaments, and in a collection of Flanders chandeliers. The gold polychromic shaft is only a romantic copy of a medieval original.

Another casket, originally from the beginning of the 16th century, is decorated with star shapes and metallic applications. It comes from Catalonia, and Moorish decorative elements appear on it. Moorish frescoes also adorn the Minaret, whose slender tower is built at the Northern end of the spacious castle park, (also called the Garden of Europe). You can see the unmistakable dominant beauty of unique building from the Knights’ Hall.  The ground floor of the castle was designed especially for representative purposes, since it allowed direct connection with the park. This is also why this space was used for various social events.  The company could enjoy a walk during the entertainment. The elaborate Gothic decoration over the northern facade with a entranceway for carriages under the balcony is reminiscent of the Knights’ glory of Liechtenstein. The glamor of these spaces, said to be unparalleled in Europe, enchanted many visitors at the time.

The adjoining Knights’ Hall gives the impression of a castle hall, thanks largely to its network vault, which mimics English castle architecture.   © Jan Miklín | zamek-lednice.com