NEO-GOTHIC CHURCH OF THE ANNUNCIATION IN BRECLAV – POŠTORNÁ 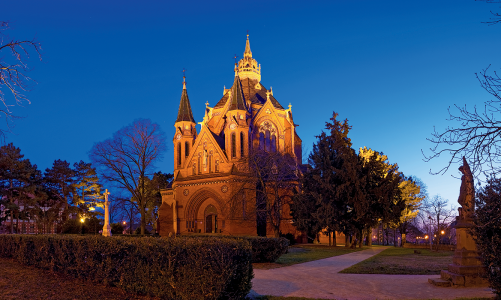 At the end of the 19th century, the people of Poštorna began asking their ruler, Prince Jan II. of Liechtenstein for a new church, which would replace the already inadequate sanctuary. (According the parish chronicle the old church was built in 1339.  It was mentioned there again in 1570). The old church, which stood on almost the same spot as the new building, had not been maintained and had fallen into disrepair. Prince Jan II. of Liechtenstein (called ‘the Benevolent’) answered their prayers and invested two hundred and fifty thousand gold coins in the construction of a new building. The Neo-Gothic church, including all its furnishings, sacristy and crosses in front of the facade built in 1902, was designed by former Liechtenstein court architect Karel Weinbrenner. Weinbrenner entered the service of Prince Jan II in 1884 and remained with him for over a quarter century. He was the Head of the Royal Buildings Office in Lednice, where he designed and implemented a number of residential and public buildings. As a result, his work greatly shaped the character and atmosphere of the town. Weinbrenner’s architectural style ranged from historicism trough Victorian to Secession.  The Prince approved his plans in 1893, but the foundation stone was not laid until 24 June 1895.  The church was consecrated on 3 July 1898. The single central brick building is built in Neo-Gothic style. Tyrolean artist Ferdinand Stuflesser created the altar and the Stations of the Cross.

Other sculptures are the work of unknown Viennese sculptors. In 1940, the church decoration was complemented by statues of St. Francis of Assisi and Anthony of Padua, created by Heřman Kotrba.

Based on their style, the stained-glass windows are probably the work of an unknown artist of the Munich school. In the entrance area, there is a choir which partly extends into the space of the nave. Unusually, the chancel is oriented to the southwest. This is because of the orientation of the main facade of the church to the end of the Breclav way. The octagonal nave adjoins a pentagonal chancel with sacristy.  On the opposite side is an entrance portal with a gable that has a polygonal bell tower on each side.

Above the entrance to the church is a larger than life statue of Jesus Christ by Josef Beyer, who also created the interior decoration. The organ came from the workshop of the Rieger brothers of Krnov in 1926 who also installed the organ in the church. Among other things, the church is notable for its construction materials, which include bricks from a local ceramics works (The Prince’s Brickworks). Two hundred different kinds of bricks, tiles, shaped bricks and glazed ceramic coverings were used in the construction. The building work was carried out by the Viennese firm of Josef Schmalzhofer. Karel Weinbrenner also built other religious buildings – the churches in Ladná and in Katzelsdorf, Austria. As well as the church in Poštorná. Karel Weinbrenner built the nearby rectory, school and doctor’s house. When designing the project, the architect was inspired by Viennese church of Our Lady of Victory (architect Friedrich von Schmidt). 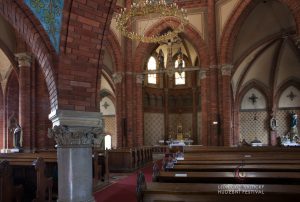