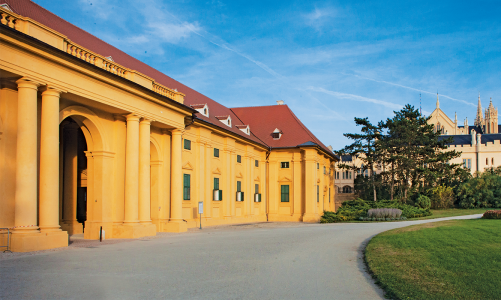 In 1560 Georg Hartmann I. Liechtenstein came into the indebted Mikulov estate. In the same year, he inherited the family line of Valtice Hartmann II. (1544-1585) Lednice.

Riding stables were crucial in the time of Emperor Maximilian. Extensive facilities for horse breeding were founded In Royal courts during this period.  In the Baroque period these symbolized prestige, wealth and power.

Riding halls were a necessary component of Royal residences. Their elevation to status of representative aristocratic buildings occurred as early as the Renaissance.

This was also the case in Lednice, the summer residence of the princely family of Liechtenstein. The vision of Prince Karel Eusebio of Liechtenstein was implemented in a project on the eastern side of the castle. Johann Bernard Fischer von Erlach began construction in late 1687 and in 1688

The riding school complex is the oldest surviving part of the original Lednice castle grounds.

The riding school is located on the western edge of the site and links to the site of the former “hunting court”. It is a three-winged structure extended by two short wings on the northern side.

The buildings surround an approximately square courtyard which is accessible through three gates; the monumental three axis gate – portico in the south wing and two analogous, opposing uniaxial gates, which accentuate the high gables on the west and east wings. 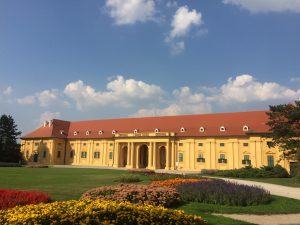