As it did last year, the Second LEDNICE|VALTICE MUSIC FESTIVAL 2017 will both begin and end in the beautiful premises of Lednice and Valtice Castles. Classical music will breathe new life into the historical gems of the Lednice-Valtice area and will bring music closer to people from all over the Czech Republic and from the surrounding countries.

Several buildings in which the concerts will take place were designed by the genius Liechtenstein family architect, Josef Hardtmuth.  He was a contemporary, admirer, and later donor of Wolfgang Amadeus Mozart and Franz Schubert.  These composers will be a significant part of the eight-concert festival program.

Their compositions will be played by leading ensembles including PhilHarmonia Octet Prague, the Janáček Chamber Orchestra, and Barocco Sempre Giovane. The young soloists who will perform with them are already distinguished classical musicians due to their participation in internationally acclaimed competitions.  They include Kateřina Javůrková – French horn, Jan Mráček – Violin and Patricia Janečková – Soprano. The world-famous Pavel Haas Quartet will open the festival, and the Bohuslav Martinů Philharmonic Orchestra will perform with outstanding cellist Jiří Bárta at the closing gala under the baton of Vojtech Spurny.

An extraordinary educational concert, which will take place in the Valtice Castle Riding Hall on Monday, 2 October 2017, will bring classical music to even the youngest audience. This will be a performance of a Karlheinz Stockhausen-Harlekýn composition by clarinettist Karel Dohnal.  Immediately after the performance, the children will be able to draw their concert experiences including for example their impression of the musical clown. We are sure that not just the children will be entertained by the skilful linking of pantomime elements to the musical interpretation.  Even the crayons and pencils themselves are connected to the Lednice-Valtice area. The chief architect of the Liechtenstein family, when drawing the individual buildings sometimes dirtied his hands from the crayons and so decided to enclose them in wood. He later patented this invention and in 1790 he established a ceramics and pencil factory.

This year’s LVHF 2017 is presented under  the patronage of the Governor of the South Moravian Region, JUDr. Bohumil Šimek. 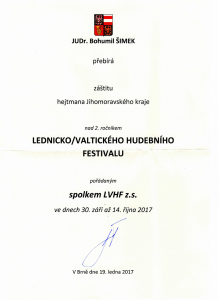 This year’s LVHF 2017 is presented under the patronage of Minister of Culture of the Czech Republic, Mgr. Daniel Herman. 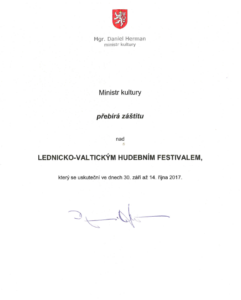 In the years to come, the festival program will focus even more on compositions that are also historically related to the area, and especially from the period during which the Principality of Liechtenstein operated the royal ensemble, Harmonia.

Josef Triebensee, who was the bandmaster of this, the Prince Liechtenstein’s wind ensemble, commissioned a large number of chamber pieces and operas from Vienna for the then owner of the estate, Alois I. Wolfgang Amadeus Mozart composed one of his works for this music lover.

In this way, we would like to bring more people to our festival, including professionals from neighbouring Austria and Slovakia.